Gehal Singh: martyr to the supreme cause 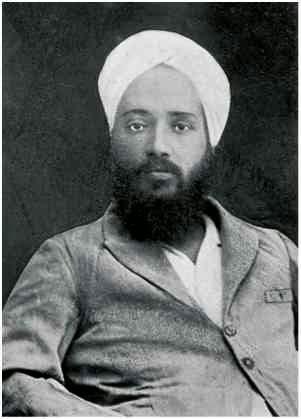 On the face of it this photograph of a withdrawn gentleman does not tell much except that it night have originated in an old family album. Rolland Barthes said that we give captions ‘to sublimate, patheticise or rationalise the image’.

This photograph does demand a long caption – a little story. The man in the picture is a Sikh communist leader, Gehal Singh, of village Chhajjalvaddi in Amritsar district in the Punjab. The year: 1947.

A colonial operator Sir Cyril Radcliffe had drawn a dividing line to dismember the body Punjab. A new country called Pakistan – the land of the pure – purportedly on the basis of religion of Islam came into being. Migration of population on the largest scale in known human history was taking place and the Muslims and Sikhs were slaughtering each other. A full-fledged civil war was on. In the total madness, there were some sane voices around. The Punjabi communists of Sikh, Hindu and Muslim backgrounds were actively involved in peace committees trying to save the lives of innocent people. Comrade Gehal Singh was one of them.

Instigated by some Sikh leaders of the Akãl Sena* who were behind the butchering of Muslims in the district of Amritsar, Gehal Singh was abducted in a jeep one evening while he was cycling back home. He was tortured in BurjPhoola Singh, His hair was cut and body was hacked into pieces and later it was said to have been thrown in the burning furnace in the langar community kitchen of the Golden Temple.

That was the end of a great humanitarian – a gurmukh – a true Sikh. The known culprits were never brought to justice

(with kind permission of Amarjit Chandan)

Archives of the CPI from 1947: 'Bleeding Punjab Warns' by Dhanwantri & P.C. Joshi