Showing posts from March, 2012
Show All

By Dilip - Saturday, March 31, 2012
An interview with Michael Kumhof Unless countries reduce income disparities the next financial collapse is inevitable, argues economist Michael Kumhof. Perhaps a surprising conclusion from a senior researcher at the IMF. In interview he argues that equality is the best recipe against crisis. International Monetary Fund rescue packages are usually associated with "structural adjustment", privatisation and liberalisation. But IMF economist Michael Kumhof's recipe for avoiding crunches is increased equality – a conclusion that has brought him worldwide attention.  Kumhof considers the cause of the financial crisis in 2008 and the debt crisis in 2011 to be increased inequality, especially in the United States. He has argued that in order to avert future crises, the negotiating position of the majority vis-à-vis the very rich needs to be strengthened. "I bet you've never heard an IMF economist call for increased salaries before. This is highly controversial",
Read more 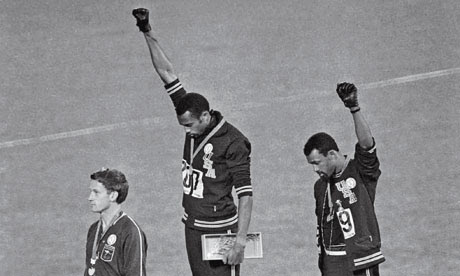 You're probably not familiar with the name John Carlos. But you almost certainly know  his image . It's 1968 at the Mexico City Olympics and the medals are being hung round the necks of  Tommie Smith  (USA, gold), Peter Norman  (Australia, silver) and Carlos (USA, bronze). As the Star-Spangled Banner begins to play, Smith and Carlos, two black Americans wearing black gloves, raise their fists in the black power salute. It is a symbol of resistance and defiance, seared into 20th-century history , that Carlos feels he was put on Earth to perform. "In life, there's the beginning and the end," he says. "The beginning don't matter. The end don't matter. All that matters is what you do in between – whether you're prepared to do what it takes to make change. There has to be physical and material sacrifice. When all the dust settles and we're getting ready to play down for the ninth inning, the greatest reward is to know that you did your job when yo
Read more

Another time, another mosque

By Dilip - Friday, March 30, 2012
This article is based on a lecture I prepared for university students, named  Mahatma Gandhi’s Legacy . It includes the text of the Delhi Declaration on communal harmony, January 18, 1948. 'Volume' citations are from Gandhi's Collected Works. Gandhi’s Last Fast: January 13-18, 1948 From September 1947, the communal situation in north India became grievous. Massacres were taking place in Punjab and Sindh, sparking off the migration of over ten million Hindus, Sikhs and Muslims. In September, hundreds of Muslims of Delhi had been killed in Karol Bagh, Subzi Mandi and Paharganj. Tens of thousands of Hindu and Sikh refugees from Punjab were crammed into Diwan Hall, Chandni Chowk and Kingsway Camp; while thousands of Muslims, including Meos from Alwar and Bharatpur, camped in fear in Jamia Millia, Puran Qila and Humayun’s Tomb. The life of Dr Zakir Husain, VC of Jamia Millia and president of the Hindustani Talimi Sangh, was saved by a Sikh army captain and a
Read more

By Dilip - Friday, March 30, 2012
There are still people who admire Godse for shooting a defenceless, unarmed old man at point blank range in a prayer meeting.. After all, modern society is awash with extremist beliefs, including support for suicide bombers and vigilante violence. E xtremism has taken centre-stage i n the guise of communal ideology and prejudices. People in high of fice believe in collective guilt (denouncing entire communities for the sins of a few), controlled mobs, revenge killing and vigilantism.   Click the title for Parts 1 & 2 of the Report [of the 6 volume document] of the  Commission of Inquiry into the Conspiracy to Murder Mahatma Gandhi by Justice Jeevan Lal Kapur  [Supreme Court of India]. The commission was established in 1965 &  submitted i ts report on 30 Sept 1969 . A whiff of evil A message and an appeal    Peace as a punctuation mark in eternal war The Supreme Court,Gandhi and the RSS Apoorvanand:  गांधीजी का आखरी महीना  - Talk on Gandhiji's Last Month Pune, Oct
Read more
More posts