Showing posts from December, 2015
Show All

CAS MUDDE - 2015 and the struggle for Europe’s core

By Dilip - Wednesday, December 30, 2015
The power that feminism currently wields has been described as a “moment” or a “trend” – but it’s much more than that. The last 10 years of feminist work have paved the way for a feminism that’s deeply resonant and embedded in the culture, and it’s not going anywhere anytime soon. And no matter how you cut it, gender justice has been at the forefront of the national conversation and a lot of people’s minds this past year. Some was good: celebrities spoke up against sexism, the military ended the ban on women in combat, battling sexual assault took center stage, and companies from Netflix to Spotify created realistic and generous parental leave policies.  Some of it was bad: a woman was arrested after desperately trying to end her pregnancy with a coat hanger, a Planned Parenthood was the target of a terrorist shooting and, no matter a woman’s accomplishments, we were reminded that there is always someone ready to insult her with sexism or racism. And some of it was a bit of both, lik
Read more

By Dilip - Wednesday, December 30, 2015
"This ship is sinking,"  retired U.S. Army Colonel Lawrence Wilkerson tells Abby Martin, adding that " today the purpose of US foreign policy is to support the complex that we have created in the national security state that is fueled, funded, and powered by interminable war."  The former national security advisor to the Reagan administration, who spent years as an assistant to Secretary of State Colin Powell during both Bush administrations reflects on the sad but honest reflection on what America has become as he  exposes the unfixable corruption inside the establishment  and the corporate interests driving foreign policy. "It's never been about altruism, it's about sheer power." see video: http://www.zerohedge.com/news/2015-12-20/americas-ship-sinking-former-bush-official-exposes-unfixable-corruption-inside-estab    see also SATYABRATA PAL - August 6, 1945. Seventy Years Later, the World is Still Under the Spell of this Monstr
Read more

Tyler Durden: Something Strange Is Taking Place In The Middle Of The Atlantic Ocean // Recession, retrenchment, revolution? Impact of low crude prices on oil powers

By Dilip - Wednesday, December 30, 2015
"The idea is to keep tankers on the water as long as you can and try to find a stronger market." Early last month,  we noted  that something very strange was happening off the coast of Galveston, Texas.  As FT reported, "the amount of oil [now] at sea is at least double the levels of earlier this year and is equivalent to more than a day of global oil supply.” In short:  the global deflationary crude supply glut is beginning to manifest itself in a flotilla of stationary supertankers, as millions of barrels of oil are simply stuck in the ocean as VLCCs wait to unload. Ultimately, this led to nearly 40 crude tankers with a combined cargo capacity of 28.4 million barrels waiting to anchor near Galveston. In the latest sign that the world is simply running out of capacity when it comes to coping with an inexorable supply of commodities,  three diesel tankers en route from the Gulf to Europe did something rather odd on Wednesday: they stopped, turned around in the m
Read more 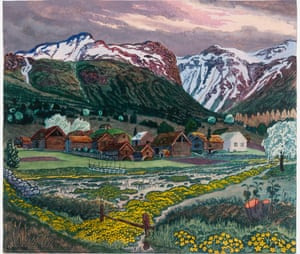 Norway’s legendary modern artist who captured his country’s fantastically eerie landscapes is about to be celebrated. And no, it isn’t  Edvard Munch .  It’s Nikolai Astrup – a legend in his own land, but barely known outside of it. In fact, the  Dulwich Picture Gallery, in London , is putting on the first significant show of Astrup’s work outside Norway in the new year. Will it make him as famous as Munch, his contemporary? Marsh Marigold Night, c 1915, by Nikolai Astrup. Photograph:  Dag Fosse/Kode Art Museums of Bergen It seems suspiciously as if the world only has room for one great  Norwegian  artist.  Astrup  was born in 1880 and died in 1928, while Munch was born in 1863 and died in 1944. It is impossible to avoid comparing the two, because both are expressionists who take the real world and transfigure it in blazing, lurid colours. They even have a favourite theme in common: the strange light of summer evenings, when the warmth of the far north makes everything look
Read more

By Dilip - Wednesday, December 30, 2015
More than two months after a Southern California natural gas leak began spewing as much as 128,000 pounds of planet-warming methane into the atmosphere every hour, the source of the rupture has been located, officials said Monday. But California regulators and Southern California Gas Company executives say it could take several more months to plug the leak, prompting some environmentalists to compare the blowout to the 2010 Deepwater Horizon oil spill in the Gulf of Mexico. The rupture, which began Oct. 23 at the company’s huge underground natural gas storage facility 20 miles northeast of Los Angeles, has forced the evacuation of some 1,700 homes in nearby Porter Ranch. As of Dec. 22, the leak had emitted an estimated 1.6 million metric tons of greenhouse gases into the atmosphere, according to a report from the California Air Resources Board. That’s equivalent to the daily emissions of 7 million cars or all the state’s oil refineries, said scientists at the  Environmental Defense F
Read more

Mahesh Peri - Facebook Is Not A Charity, And Nothing Is For Free

By Dilip - Wednesday, December 30, 2015
No corporate works for charity -- by intention and definition. To explain why  Facebook's intentions  are fraudulent, I will take the experience of Delhi's healthcare policy. Delhi decided to provide  quality healthcare to all its citizens.  They started allotting free land (like spectrum) at a fraction of the cost for setting up hospitals with a pre-condition that they provide free treatment to 15% patients (like "free basics") from economically weaker sections (EWS). However, I have rarely seen inpatients belonging to this category in any top private hospital. Every bed is at a premium and they wouldn't waste it on a patient who isn't paying for it. But the official records will show 15% patients from the EWS category as having been treated. In India, most books are manufactured to suit a regulation! An ideal situation would have been to collect 15% of the turnover of all these hospitals and use that money to insure the EWS category. That would ensu
Read more

Anasuya Basu: The street children who run a newspaper in India

By Dilip - Wednesday, December 30, 2015
A group of street children are busy in an unusual editorial meeting in a house in the Indian capital, Delhi. They are bound by a shared passion to bring out Balaknama (Voice of Children), an eight-page quarterly newspaper which focuses on children living and working on the streets. It proudly calls itself the "world's unique newspaper for and by street and working children". Eighteen-year-old Chandni, the newspaper's editor, joins the animated discussion over the content of the next edition of the paper whose circulation has gone up from 4,000 to 5,500 copies since she took over a year ago. The reporters have either been street children or have worked as child labourers in Delhi and neighbouring states. They were rescued by Chetna, an NGO that works for the rehabilitation of street children. By one estimate, more than 10 million children live on the streets and are forced into work in India. 'Cathartic' From working as a street performer with her f
Read more

By Dilip - Wednesday, December 23, 2015
The war against radical evil requires us to take Nietzsche's project seriously: «  Ask a big question rather than deliver a grand statement : » This means: instead of focusing on God, look to ideals, and their absence in order to make them known and reassessed NB : As a reminder that love can persist in the midst of evil, here is a forgotten piece of history:   The Christmas truce, 1914 - Steven Johns The adolescent is a believer The child king that lies dormant inside of all of us, according to Freud in his Three Essays on the Theory of Sexuality (1905), would be a "laboratory scientist”:  all his senses awakened, he seeks to discover where babies come from. This insatiable curiosity is so attractive that it overshadows adolescent characteristics: precisely because there is no adolescent without the need to believe. The adolescent is not a researcher in a laboratory, he is a believer. We all are adolescents when we are passionate about the absolute. Freud was not c
Read more

By Dilip - Wednesday, December 23, 2015
International bodies have recently called for antibiotic manufacturers to make their supply chains public, and for antibiotics manufacturers to face the same scrutiny as other polluting industries. While experts from the Chinese Academy of Science told  chinadialogue  that new rules on antibiotic pollution are unlikely to be passed in the near future, trials that monitor antibiotic levels in regions where the problem is acute are possible. Worldwide, there is currently a growing crisis of resistance to antibiotics. According to the World Health Organisation, antimicrobial resistance or AMR as it is known, poses an “increasingly serious threat to global public health”, affecting everyone, regardless of age or nationality. The WHO has called for immediate action – and they are not alone. Sascha Marschang, a policy coordinator at the European Public Health Association, a healthcare non-profit organisation, said: “The EU must take responsibility and work to find effective solutions
Read more

Patrick Kingsley - Lesbos is swept by wave of compassion as refugees continue to arrive by sea // 'Love has no religion': priests and pastors reach out to refugees 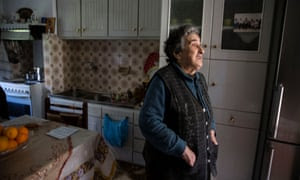 On Tuesday, the number of asylum seekers to reach Europe this year  passed 1 million. N early half of them did so via the beaches of this Greek island As an institution, the Greek Orthodox church is often considered a bastion of nationalism and conservatism. Some of its priests have even suggested Muslim migrants pose a danger to  Greece . But other churchmen have taken the same view as Dimou, who died of lung cancer on 2 September this year, and have become actively involved in efforts to help refugees and migrants... “Just recently three women arrived at the village – two of them were pregnant. All three had lost contact with their husbands and their children. We took action and reunited the families,” he said. “It was then that one of the husbands stood in front of me and kissed me. Love has no religion. Saint Paul writes in the Epistle to the Corinthians: ‘If I speak in the tongues of men or of angels, but do not have love, I am only a resounding gong or a clanging cymbal’.” (s
Read more

Mukul Kesavan - Hedgehogs and foxes: Why the BJP won't change

By Dilip - Tuesday, December 22, 2015
As we approach the second commemoration of Good Governance Day, there's a nice irony to the fact that this proudly 'Hindu' regime set out so resolutely last year to secularize Christmas. That a Bharatiya Janata Party-led government should publicly try to colonize Christmas wasn't surprising; what caught some commentators out was the speed with which the BJP and its affiliates began to ride their ideological hobby-horses. Within six months of coming to power, Narendra Modi's ministers, his members of parliament and the foot soldiers of the  sangh parivar  had begun performing adaptations of their greatest hits with the practised skill of a touring repertory company. There were the clever  ghar wapsi  skits that offered a solution to the pressing problem of India becoming a Hindu-minority nation. Mohan Bhagwat gave us an insight into inclusiveness, Rashtriya Swayamsevak Sangh-style, when he declared that Christians and Muslims were apna maal, literally 'o
Read more
More posts