Showing posts from September, 2016
Show All

Anil Nauriya - Sectarian Politics and the Partition of India: The Targeting of Nehru and the Congress

By Dilip - Tuesday, September 27, 2016
The rise of Hindutva-related organisations in India, especially since the late 1980s, has witnessed frequent attacks by them on the pre-freedom Congress in relation to the partition of India in 1947. These attacks increased since 2013 in the run-up to the General Elections of 2014. Some Hindutva organisations have become less covert than before in their glorification of the assassins of Mahatma Gandhi. Simultaneously, other sections of Hindutva forces have sought to disclaim responsibility for Gandhi’s assassination and to shift the focus of their attack on Jawaharlal Nehru. In this essay, ( Download PDF [364 KB] )  Supreme Court advocate and writer  Anil Nauriya , explores some aspects of these phenomena. He underlines also a connection between these tendencies and a development on another plane. This is that certain somewhat dubious and one-sided critiques of the pre-freedom Congress in relation to partition fostered by late 20th century colonialist historiography have been feed
Read more

By Dilip - Monday, September 26, 2016
I planned to sue the Public Security Bureau in Sichuan for exercising violence; Xia accepted my offer to hire him as a lawyer and went with me to Sichuan. Despite our efforts, we were unable to file a lawsuit in the Sichuanese courts. The Public Security Bureau, the Sichuan People's Procuratorate, and the provincial courts all denied any physical abuse took place. It is a difficult struggle to be a lawyer in China. The law stands behind those in power, and the judicial system lacks independence. I knew that bringing Xia Lin along could not change the situation. He also felt helpless about it. In 2011, we faced a familiar predicament when I was detained and released after 81 days . Fake Limited was charged with tax evasion, and it hired  Pu Zhiqiang  as its defense attorney. For that case, he partnered with Xia Lin, who was a colleague from the same law firm. Xia left the team after working on the case for a period of time. I could not agree with his reason for parting ways
Read more

By Dilip - Monday, September 26, 2016
When the struggle against the tormentor becomes a torment itself, it is imperative to speak out. Srinagar:  On a warm morning a few weeks ago, the city was uncharacteristically serene. The previous night’s protests had died down, giving way to a tranquil dawn. But outside my home in an old part of town, a loud bang woke me up. I thrust my head out, eyes half-closed with sleep. A knot of young men, their heads and faces wrapped in cloth, had gathered around a grocery store whose owner had been tending to a line of customers. In a flash, one of the men lifted a thick lathi into the air and brought it down with full force. It struck hard. The first blow was furious, as was every blow after. The reason? By opening his shop, the grocer had defied the state of collective defiance in the Valley. His act was seen as an affront to those who willingly incurred losses, inflicting harm on themselves in the hope that it would push India into giving up Kashmir. From a distance, I saw his wi
Read more

By Dilip - Sunday, September 25, 2016
An FIR has been lodged against Manish Kunjam for circulating an adivasi account of the Durga-Mahisasur conflict that upper caste migrants say hurts their religious sentiments. Manish Kunjam is also the district secretary of the CPI, and one of the best known adivasi leaders in the area, who has consistently fought against Salwa Judum and police atrocities under Operation Green Hunt, against displacement by mining companies in Bastar A spectre is haunting the Hindu right in Chhattisgarh: the spectre of adivasi and dalit or ‘ moolnivasi’  independence from the Brahminical fold. All the powers of the old order have entered into a holy alliance to exorcise this spectre: the Rashtriya Swayamsevak Sangh, local traders, the media and above all, the police. On September 15, Manish Kunjam, the Sukma, Chhattisgarh-based national president of the Adivasi Mahasabha, forwarded a WhatsApp message to a group he was part of. The message retold the adivasi version of the conflict between Dur
Read more

JAVED IQBAL - This is How a Naxalite Dies // Jharkhand: Maoists’ kin, victims of violence meet, share their stories 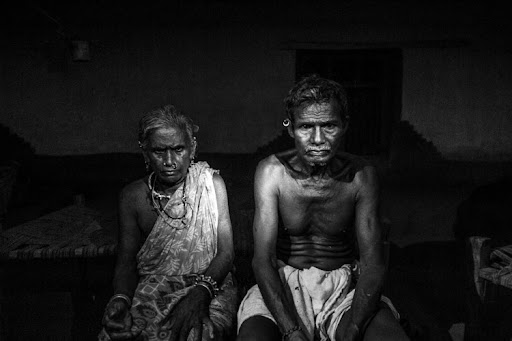 JAVED IQBAL - This is How a Naxalite Dies The story of Rajita’s life and death has a Rashomon-like quality where not just truth but the idea of what is moral depends on who is telling the tale.  A 32-year-old Maria Gond woman, Rajita Usendi, was killed on the night of May 8 in Gadchiroli, Maharashtra. She was a Naxalite. “They threw six or seven grenades to kill her…” “It was the longest encounter in Gadchiroli history…” “Her body was burnt beyond recognition…” These were some of the comments I heard about the gun battle that took place, after the police returned with the burnt corpse of the unidentified woman found in a house on the outskirts of Horekasa village in Gadchiroli district. Raje and Birija, the septuagenarian parents of the slain Naxalite commander  Rajita Usendi. Credit: Javed Iqbal Eight days later, on May 16, constable Bandhu Vichami, also a Maria Gond. was killed after being kidnapped by CPI-Maoist fighters near Koti police station for the alleged offen
Read more

By Dilip - Sunday, September 25, 2016
When Hitler fell seriously ill in 1941, however, the vitamin injections that Morell had counted on no longer had any effect – and so he began to ramp things up. First, there were injections of animal hormones for this most notorious of vegetarians, and then a whole series of ever stronger medications until, at last, he began giving him a “wonder drug” called Eukodal, a designer opiate and close cousin of heroin whose chief characteristic was its potential to induce a euphoric state in the patient (today it is known as oxycodone). It wasn’t long before Hitler was receiving injections of Eukodal several times a day. Eventually he would combine it with twice daily doses of the high grade cocaine he had originally been prescribed for a problem with his ears, following an explosion in the Wolf’s Lair, his bunker on the eastern front... The effect of the drugs could appear to onlookers to be little short of miraculous. One minute the Führer was so frail he could barely stand up. The nex
Read more

By Dilip - Sunday, September 25, 2016
A prominent Jordanian writer, who was on trial for sharing a cartoon deemed offensive to  Islam , has been shot dead outside a court in Amman where he was due to appear. Nahed Hattar, 56, was charged with inciting sectarian strife and insulting Islam after posting the cartoon on Facebook this year. The cartoon, entitled The God of Daesh (Isis), depicted an Isis militant sitting next to two women and asking God to bring him a drink. Hattar was arrested in Augustand released on bail early this month. On Sunday, he was shot in the head three times as he arrived for a hearing. According to the Jordanian state news agency Petra, a man was arrested at the scene of the shooting in the Abdali district. The government denounced the killing as a “heinous” crime. Two witnesses said the gunman, bearded and in his 50s, was wearing a traditional Arab  dishdasha , or long robe. “He was standing at a short distance of about one metre in front of Nahed on the stairs of the supreme court,”
Read more
More posts