By Dilip - Wednesday, May 18, 2022
Vanessa Hua’s  Forbidden City  is narrated by a courageous, risk-taking sixteen-year-old whose life in a small village in China is up-ended when she is selected to join an elite dance troupe of young women trained in ballroom dancing to entertain Party leaders, including the Chairman. Hua’s is a fresh feminist take on the Cultural Revolution, an intriguing perspective on a complicated historic period still partially in the shadows. The Author of  Forbidden City  Talks to Jane Ciabattari Hua, a San Francisco  Chronicle  columnist, is also the author of the novel  A River of Stars  and a story collection  Deceit and Other Possibilities  Her honors include a Rona Jaffe Foundation Writers’ Award, a Steinbeck Fellowship in Creative Writing, and an NEA fellowship. Our email conversation took place during the week that supply chain issues which had delayed the novel’s publication twice were resolved. Jane Ciabattari:  How have you managed during the tumultuous and uncertain last few years?
Read more

This Is the Sea

Madhavan K. Palat on Nehru the Historian of Home and the World. Public lecture May 26, Jawahar Bhawan 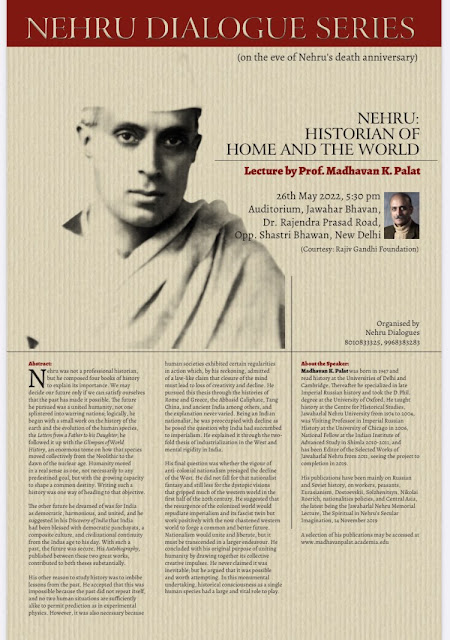 Nehru was not a professional historian, but he composed four books of history to explain its importance. We may decide our future only if we can satisfy ourselves that the past has made it possible. The future he pursued was a united humanity, not one splintered into warring nations; logically, he began with a small work on the history of the earth and the evolution of the human species, the  Letters from a Father to his Daughter ; he followed it up with the  Glimpses of World History , an enormous tome on how that species moved collectively from the Neolithic to the dawn of the nuclear age. Humanity moved in a real sense as one, not necessarily to any predestined goal, but with the growing capacity to shape a common destiny. Writing such a history was one way of heading to that objective. The other future he dreamed of was for India as democratic, harmonious, and united, and he suggested in his  Discovery of India  that India had been blessed with democratic panchayats, a composite cu
Read more

Don’t worry, he’s not going quietly into that tweetless night. By Arwa Mahdawi

By Dilip - Tuesday, May 17, 2022
Jordan Peterson is an academic, an internet personality, and  a big fan of beef . A man of many accomplishments, he’s most famous for writing a bestselling book called 12 Rules for Life: An Antidote to Chaos while simultaneously living what can only be described as an  incredibly chaotic  life. The latest Peterson drama comes to us via Twitter, which the academic has just dramatically announced he will be “ departing ” forever. Don’t worry, he’s not going to go quietly into that tweetless night; Peterson has  promised  us all a long article explaining his problems with the platform soon. For now, however, he wants us all to know that Twitter is a hellhole which makes your life infinitely worse. “The endless flood of vicious insult [sic] is really not something that can be experienced anywhere else,” Peterson  tweeted on Monday , “If I have something to say I’ll write an article or make a video. If the issue is not important enough to justify that then perhaps it would be best to just
Read more

Dalai Lama's message for Buddha's birth, enlightenment and death on May 16, 2022

By Dilip - Tuesday, May 17, 2022
His Holiness the Dalai Lama's message for Vesak , the Buddhist celebration of Buddha's birth, enlightenment and death on May 16, 2022 YouTube:  https://www.youtube.com/watch?v=ENs7rKB3MGI More posts on the Buddha An Auspicious Day from the Bhaddekaratta Sutta Middle Length Discourse 131 The Buddha said, Don’t chase the past Or long for the future. The past is left behind; The future is not yet reached. Right where it is, have insight Into whatever phenomena is present; Not faltering and not agitated,  By knowing it one develops the mind. Ardently do what should be done today – who knows, death may come tomorrow. There is no bargaining with Mortality  And his great army. Whoever dwells thus ardent,  – active day and night – Is, says the peaceful sage, One who has an auspicious day An Auspicious Day Dalai Lama: "I am fully committed to the oneness of humanity" Shobhit Mahajan: The ties that bind religion, popular culture Nikolai Berdyaev: The Religion of Communism (
Read more

By Dilip - Tuesday, May 17, 2022
As details of the Buffalo mass shooting emerged over the weekend, much of the media focussed on the shooter’s  self-stated motivation : his racist belief that white Americans are being deliberately replaced through immigration in a “great replacement” theory. Over at  Fox News , however, there was barely any mention of the white gunman’s alleged reasoning for opening fire at a supermarket, killing 10 people and wounding three more, in a predominantly Black area. The absence of coverage of the motive was revealing, given Fox News’s most popular host, Tucker Carlson, has pushed the concept of replacement theory in more than 400 of his shows – and has arguably done more than anyone in the US to popularize the racist conspiracy. Fox News,  according to  Oliver Darcy, a media correspondent for CNN, “largely ignored” the fact that the shooter had been inspired by replacement theory. Darcy searched transcripts from Fox News’s shows, and found one brief mention, by Fox News anchor Eric Shawn.
Read more

By Dilip - Monday, May 16, 2022
In 1996 physicist Alan Sokal published a seemingly pretentious but otherwise innocuous paper entitled Transgressing the Boundaries: Towards a Transformative Hermeneutics of Quantum Gravity  in the postmodern journal  Social Text.  After its publication, Sokal announced that the paper was designed as a deliberate parody of post-modernism’s appropriation of scientific jargon. It was filled with largely meaningless or even absurd claims that nevertheless “flattered the editors’ ideological preconceptions.” Sokal immediately became infamous across the academic world, with some welcoming his efforts and parody and other’s accusing him of dishonesty and a lack of integrity. More importantly, Sokal’s parody immediately set off a political firestorm.  Fashionable Nonsense; by Alan Sokal and Jean Bricmont Reviewed by Matt McManus Many on the Left accused him of lending ideological support to conservative efforts to repress critical and transgressive scholarship. And some on the Right were only
Read more
More posts