Showing posts from March, 2015
Show All

Photo of Syrian Child 'Surrendering' to a Camera is Breaking Hearts 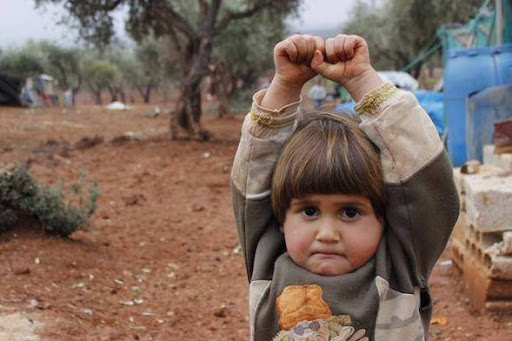 It is the saddest possible comment on the conflict in Syria, in which millions of children have been displaced or otherwise affected. An image tweeted by photojournalist Nadia AbuShaban shows a four-year-old Syrian child 'surrendering' after mistaking a camera for a gun. The toddler gazes into the lens with lips pursed, eyes grim, arms raised, frozen with fear.  The photo, reportedly taken at a Syrian refugee camp by Turkish journalist Osman Sagirli, has been retweeted over 10,000 times since it was first posted on March 24. The image appears to have been sourced from this un-dated  newspaper article .  BBC  spoke to the photographer, Osman Sagirli who said the picture is of a four-year-old girl, Hudea and was taken at an Atmeh refugee camp in Syria in 2014. Says Sagirli, "I was using a telephoto lens, and she thought it was a weapon. I realised she was terrified after I took it, and looked at the picture, because she bit her lips and raised her hands. Normally kids r
Read more

Ghassan Khatib: The rise of the Israeli far right & the future of Palestine

By Dilip - Tuesday, March 31, 2015
The victory of Benjamin Netanyahu and his right-wing allies last week at the polls amounts to a major defeat of left and center-left parties in Israel and is merely one more indication that Israeli society is continuing a strong trend of radicalization. Over the last 20 years, with only some fluctuations, each successive Israeli government and parliament has been more radical and more right-wing than the one before it. The only way to explain this drift in the direction of increasingly rigid and extreme political positions is the absence of accountability. Israelis have been allowed to have their cake and eat it, too. They have been allowed to continue disregarding the expectations of their backers, particularly the US and Europe, and to continue expanding settlements while ignoring their friends’ chiding remarks.  Part of the reason for this is that in the current regional security chaos, Israel is seen as increasingly valuable to Western powers. Palestinians, meanwhile, have
Read more

By Dilip - Tuesday, March 31, 2015
The murder of Bangladeshi blogger Oyasiqur Rahman by Islamist fanatics came barely a month after another blogger-writer, Avijit Roy, was killed in the country. Both were secular, liberal and freethinkers. Neither conformed to religious norms. Both were felled with machetes. They were however not the only ones to be slayed for questioning the obvious. And it is unlikely that they will be the last. Roy was hacked to death on the campus of University of Dhaka, which he called home and where his father had been a professor of physics. Though a biomedical engineer by training, he donned many hats. He was a teacher at Bangladesh’s premier engineering university, an internet activist and a secularist writer who condemned religious extremism and superstitions. His blog Mukto-Mona (meaning, liberal minded) was a prominent platform for atheist bloggers and freethinkers. On February 27, Roy was returning home with his wife from a book fair when they were stopped and struck with machetes. Tha
Read more

Kolkata madrasa head attacked for ‘trying to be a Rushdie’

By Dilip - Tuesday, March 31, 2015
Masum Akhtar, a newspaper columnist and the headmaster of a madrasa in Kolkata’s Metiabruz area, was attacked by suspected Muslim hardliners on March 26. Speaking to The Indian Express soon after being discharged from the hospital, Akhtar said he feared for his life and would approach Chief Minister Mamata Banerjee for help. Akhtar was treated for head injuries after a mob beat him with iron rods. “My life is in danger. I am physically brutalised and mentally traumatised. There is no place for free thinking in the society,” he said. The provocation for the attack, he said, seems to be a class he took earlier this month, in which he spoke about Islam. “I am afraid some students misinterpreted my teaching and circulated that in the area, after which the attack was organised,” Akhtar said. Akhtar said he had also written an article on the battle of Karbala in the Dainik Statesman last year, giving a historical perspective to the event. After that, he started receiving threatening cal
Read more

By Dilip - Tuesday, March 31, 2015
The Supreme Court issued notices Tuesday to senior BJP leaders, including L K Advani, Uma Bharti, Kalyan Singh and Murli Manohar Joshi, and several others, asking why conspiracy charges against them should not be restored in the 1992 Babri Masjid demolition case. FROM EXPRESS ARCHIVES: The Ayodhya Files A bench led by Chief Justice H L Dattu asked the leaders to submit their responses within four weeks on why they should not be asked to stand trial for their alleged complicity in the demolition. They have also been given liberty to raise objections on the delay in seeking restoration of charges against them.  Conspiracy charges were dropped by a trial court in 2001 and the order was upheld by the Allahabad High Court in 2010. The CBI appealed against the High Court order but only after nine months. Advani and others sought dismissal of the CBI petition, citing delay as reason. The notices were issued by the Supreme Court on a fresh petition filed by Haji Mehboob, one of th
Read more

By Dilip - Tuesday, March 31, 2015
Lucknow:  An Income Tax officer was on Tuesday arrested by CBI while allegedly taking a bribe of Rs two lakh from a person, after which his fellow officers assaulted the CBI team and seriously injured two persons.  CBI sources said Niranjan Kumar had demanded a bribe of Rs 10 lakh from the man for settling an issue of income tax assessment for the financial year 2011-12.  While he was receiving the first installment of Rs two lakh of the bribe, CBI team carried out a search and caught him, they said. Members of Income Tax Officers' Union soon gathered and assaulted the CBI team with fire extinguishers seriously injuring a witness and an inspector level officer of CBI while three more agency officials received minor injuries in the process. The sources said one of the CBI officers has been admitted in the hospital.  They said the agency will file an FIR against the tax officials at a local police station for alleged assault and obstruction in the work of the government agency. &q
Read more

By Dilip - Tuesday, March 31, 2015
In a numbing incident of violence in rural Maharashtra, a 45-year-old woman was gang raped at gunpoint for allegedly refusing to ‘donate’ towards a traditional Hindu ritual in Sonai village in Ahmednagar district. The district police have booked case against a former sarpanch and three others for meting out “rough justice” in an instance of extreme intolerance which has sent shockwaves throughout the district. The woman’s ‘crime’ had been to refuse donation for ‘Harinam Saptah’ — a traditional Hindu ritual involving mass worship of a deity or patron saint during a seven-day period. According to the woman’s daughter, the sarpanch, Laxman Ghule, along with his wife and others from the village, stormed into the victim’s house in the early hours of Friday last week.  “They beat up my father with shovels and sharp weapons, badly damaging his legs. My brother was later administered a horrific beating. They then set upon my mother with a pistol to her head, brutally assaulting her. No one
Read more

By Dilip - Tuesday, March 31, 2015
'The same people who clamoured for a Lokpal whose selection must not be left for the government are today saying they will themselves appoint their own Lokpal. Though our party constitution says the outgoing members of the Lokpal will appoint their successors...' Prashant Bhushan was one of the four leaders who were voted out of the AAP’s National Executive at a the party’s National Council meeting on Saturday. Bhushan, who had raised questions on the party’s functioning and was voted out of the Political Affairs Committee as well, has alleged that hooliganism and goondagardi was rampant in the Council. Personally, how much has this controversy hurt you? It has hurt me personally. But it is not so much a question of personal hurt. It is the fact that people whom I worked closely with and who I had supported have descended to such levels of resorting to blatant lies, resorting to fabrications, of resorting to all kinds of unethical and illegal means and now resorting
Read more

R K Misra on the Modi government and free speech - Legal leash: Rat In, Cat Out

By Dilip - Monday, March 30, 2015
Tallest trees dread thunder the most. No wonder personal freedom is anathema to the power placed. Prime Minister Narendra Modi is no different. As Chief Minister of Gujarat, he was ever ready to stick a knife into anything remotely resembling a Sonia-Singh led Centre. Now sitting in the hot seat himself, with a majority to match, he is no better than his predecessors. Actually he is worse. Fast on the ‘tweetstake’ opposing section 66A of the Information and Technology Act brought in by the UPA  in 2006 and  passed December 22, 2008, the BJP (read Modi, for he decides) when in power did a complete U-turn. Challenged in the Supreme Court by a 24-year-old Shreya Singhal, the Modi government  favoured  retaining the Section. A stunning slap from the Supreme Court later, both the Congress and the BJP now sit red-faced, dishing out lame duck laments. The offensive piece of legislation, which authorised police to make arrests for any social media posts it deemed offensive, has been struc
Read more

Megadroughts the Future of the U.S., NASA Study Says

By Dilip - Monday, March 30, 2015
The United States will likely experience 'megadroughts' the magnitude of which haven't been experienced in a millennium, due in large part to man-made climate change, a new study conducted by NASA, Columbia University and Cornell University scientists said.  The study analyzed climate models and tree ring records in portions of at least 16 states and found that global temperature rise due to man-made climate change, and not a lack of precipitation, could increase the chance of the West and Southwest experiencing a megadrought -- a  severe drought lasting decades -- by the year 2100 to more  than 80 percent , National Geographic reports.   "This is an amazing result ... The precipitation is not so dire. It is the escalation in temperature that is driving the model simulations toward dramatic aridity, " David Stahle, a paleoclimatologist at the University of Arkansas points out to LiveScience.com. (MORE:  Despite Arctic Blasts, January 2015 Warmer Than Averag
Read more

Another Blogger Hacked to Death in Dhakha, Big Knives Used, Says Police // Bangladesh blogger becomes second to be murdered in a month

By Dilip - Monday, March 30, 2015
NB : In the name of 'hurt sentiment', are fanatics are to be protected by the state and all of us driven to the wall by murderous hooligans because we dare to criticise religious belief? I believe in respecting peoples' religious beliefs, but that does not imply that all such belief is exempt from criticism. Do the faithful of all creeds want all criticism of religion to be banned? The communal grip over state machineries in South Asia has become so tight that the police have become their agents in destroying freedom of speech. There are several state-registered ongoing cases against atheist bloggers in Bangladesh. The murdered Avijit's wife Rafida told Reuters:  “While Avijit and I were being ruthlessly attacked, the local police stood close by and did not act” .  Meanwhile this is what is going on in Indonesia:  Violent anti-communism is alive and well in Indonesia .   And this in India:  Smruti Koppikar - Maharashtra CM has no will to probe my father's murd
Read more
More posts