Showing posts from 2012
Show All

By Dilip - Monday, December 31, 2012
MUMBAI: Twenty nine-year-old, Tarique Mohammad Qureshi, wears his heart on his sleeves as he leads a crusade against criminalization of destitution. Six years ago, when he was pursuing his masters at Tata Institute of Social Science, he had enlisted local boys to help in field work. One day, many went missing; they had all been arrested on charges of beggary. Nearly 20 states and the Union Territory of Delhi treat beggary as criminal offence. State welfare departments and the local police can carry arbitrary raids to clean up the streets — anyone who looks impoverished and ragged, such as a daily wage labourer, can be picked up. Then the person is produced in a special beggar's court, where typically criminal charges are slapped and what follows is an indefinite custody. "Beggary prevention laws — largely relics of the British era — were meant to not merely detain but also rain and rehabilitate. However, the focus stops at custodial detentions. Majority of those rounded up
Read more

Take back the night, liberate the city ! Break the silence and end the violence.

By Dilip - Friday, December 28, 2012
Dec 29:  Delhi Gangrape: Victim dies in Singapore hospital This is one of the worst tragedies in recent memory. There are attacks on Indian women every day, somehow this one concentrated the sense of injustice and helplessness that we all feel. Let us remember that the bus in which she was raped was running illegally, without a permit and had been impounded six times in 2 years. We may only guess how and why it was allowed to be on the roads. We may also wonder whether senior IAS & IPS officials, not to mention elected representatives across the political spectrum are aware of the regular intake of 'hafta' - something all private operators of transport vehicles, and all street vendors know about. The Chief Minister asks us to think and reflect. Yes, Madam, so we will. But can greater and lesser state officials ever think of a world without 'hafta'? Can we ever think of a woman entering a public transport vehicle or a police station without anxiety? May we dare to h
Read more

By Dilip - Thursday, December 27, 2012
It is believed that Pakistan’s descent into the quagmire of violence, partaken in the name of religion has its roots in 1974 when the otherwise ‘secular’ government of Z A. Bhutto declared (through legislation) the Ahmadi community as a religious minority.  Many Pakistani political historians have also correctly pointed out that the Bhutto government’s move in this regard set off various other scenarios that set the scene for its own dramatic downfall in 1977.  Without getting into the theological debate of whether the Ahmadi community deserved excommunication from the fold of Islam in Pakistan or not, one can, however, reach a political conclusion that this issue has triggered the demise of democratic and non-religious forces that sided with those who originally initiated legislative action against the Ahmadis. The following examples in this context should also be taken as a warning by democratic parties on both sides of the ideological divide that their ‘pragmatic’ association wi
Read more

The Left is the only hope for the country: Ashok Mitra in conversation with Prasenjit Bose

By Dilip - Tuesday, December 25, 2012
Ashok Mitra and Prasenjit Bose represent two generations of the Indian Left. Mitra, 84, is a well-known economist. He was finance minister in West Bengal between 1977 and 1987 and chief economic adviser to Indira Gandhi's government. Prasenjit Bose, 38, is a former convener of the CPI(M)'s research unit. He criticised the party for backing Pranab Mukherjee's candidature as President and was removed from the party. Mitra and Bose have had their grouses with the party. Here they discuss what's left of the Left..  Prasenjit Bose (PB): We have been witnessing a global economic crisis for the past four years. This whole triumphalism which we saw in the immediate aftermath of the fall of the Soviet Union; Francis Fukuyama saying that it's the end of history. How would you look at such a prognosis today, in the light of the global crisis? Ashok Mitra (AM): I would say that Marx's ideas about the final stage of capitalism are about to be vindicated by the latest seri
Read more

The working life of an ordinary Delhi policeman

By Dilip - Sunday, December 23, 2012
Reviled as an ineffective, uncouth force that terrorizes people rather than protect them,  Delhi Police  officials find scarce favour with Delhiites. Indrani Basu of TOI spoke to a lower functionary of the force to unveil a lesser-known side of the daily functioning of the 76,000-strong team that is supposed to keep the city safe.  "When I joined the police force, I didn't know I would spend most of my time doing things other than what I was trained for. The public expects police to help them with every problem, including matters unrelated to our work.  The control room receives roughly 24,000 calls a day; 70% of these are not policing matters. Almost daily we are called in for civic disputes, problems with electric supply, presence of stray dogs, monkeys - the list is endless.   Civic agencies should handle such complaints but people call the police as other control rooms don't spring into action. We have to resolve the issue as it may become a law and order problem. Ther
Read more

Behind the mask of revolution. Global separatism in the Russian context

By Dilip - Saturday, December 22, 2012
Unlike, say, Marxism or Fascism, Anarchism is not a book which humanity has finished reading. And in the current era of globalization, when national governments are in crisis and local political protests on the increase, the as-yet unread page of anarchist theory may turn out to be more relevant than ever. ‘Either the state suppresses individual rights and local life and extends its power over all aspects of human activity, which provokes struggles for power that only exchange one tyranny for another, or the state has to be destroyed. If this happens, energetic individual and group initiatives and voluntary agreements will provide the basis for the beginnings of a new life in thousands of population centres. The choice is yours!’   Pyotr Kropotkin ... The revolution of 1968 couldn't win out everywhere. The Iron Curtain and the suppression of the Prague Spring prevented the rock-n-roll wind of the 1960s storming into the communist world and reforming it. As a result, the ‘60s ge
Read more

Mining in Odisha: A decade of loot

At more than Rs 65,000 crore, the mining scam in Odisha has surpassed that in Goa and Karnataka. The penalties, however, came too late In December last year, days before an inquiry commission headed by justice M B Shah was slated to visit Koira and Joda mining circles in northern Odisha, piles of documents were burnt in the office of deputy director of mines in Koira. In November this year, just days before the commission’s third visit, the Odisha government slapped a fine of Rs 65,493 crore  on 104 mine lessees  for extracting more than the permitted quantity of iron ore, manganese and chromite between 2000 and 2010 (see ‘Who’s who among offenders’).  The commission was set up by the Centre in 2010 to probe illegal mining across India. It is expected to submit its report on Odisha by December end. At present, of the 600 leases in the state, 388 have been either suspended or temporarily discontinued. The state environment minister recently told the Assembly that 111 mines have bee
Read more

Is Greece a racist state?

By Dilip - Friday, December 21, 2012
Though the surge in support for the neo-fascist  Golden Dawn  has gained considerable attention in the international media, this phenomenon is better understood within the context of developments affecting society as a whole. It is Greek society in economic depression and its attitudes towards the other – the migrant or the foreigner – that will be the subject of this article. Modern Greek history will be read as a history of migrations, both international and internal, older and newer migrants finding themselves in competition as they seek to renegotiate their position in society and their identities. It is in the light of these previous migrations that an effort will be made to comprehend contemporary policies and current attitudes towards immigration. European legislation on migration is increasing the instability of the Greek state at this crucial juncture, and, as a result, contributing to the magnitude of the crisis. Urban strangers  Migration is not new to the region.  N
Read more

End of the world?

Eye in the sky over India: Camera on a kite snaps fabulous photographs 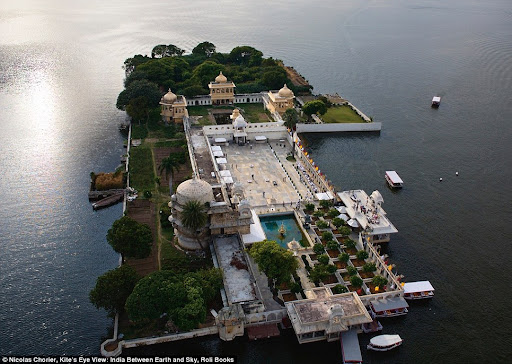 Taken from skies high above India these startling images provide a new perspective on the country's rich culture and vibrant landscapes.  Incredibly they were snapped not from the inside of an aeroplane but from camera hanging from a simple kite.  For the last nine years French photographer Nicolas Chorier has been attaching one of his four specialist cameras to a simple Japanese-style kite in order to take thousands of pictures of places from above. 'From above it's a completely new vision, new perspectives, new ways to understand the landscape and heritage,' said Nicolas.. see more: http://www.dailymail.co.uk/news/article-2238776/Glide-Aerial-images-taken-kite-provide-new-perspective-Indias-striking-landscapes-colourful-culture.html
Read more

BANGLADESH: Nothing Secular about it - by Nurul Kabir

Successive regimes in Bangladesh, including the Awami League, have betrayed secular promises to usher in a hardline Islamic State which has given a handle to fanatics to persecute and brutalise the religious minorities - Nurul Kabir; Editor New Age, Dhaka   A Buddhist monk with the remains of his belongings in Cox's Bazar All successive governments, including that of Sheikh Hasina’s Awami League, vigorously carried forward the non-secular programmes of Sheikh Mujib, giving a fillip to the ‘backward movement’ of Bangladeshi society .  To begin with, the military government headed by Justice Abu Sadat Mohammad Sayem, took away from the Constitution, by a martial law proclamation in May 1976, the provision that prohibited use of religion for political purposes. Then came another proclamation in 1977, which struck out Article 12 of the Constitution that proclaimed ‘secularism’ as a fundamental principle of the State and inserted into the book new provisions professing “absolute
Read more

By Dilip - Wednesday, December 19, 2012
Three more health workers vaccinating children against  polio  have been shot dead in  Pakistan  in attacks blamed on Islamic militants, bringing the total killed this week to eight. Wednesday's attacks all took place in the restive western frontier province of Khyber Pakhtunkhwa – one just outside the city of Peshawar and two others in the town of Charsadda. Two men and a woman have been killed. The volunteers were taking part in a three-day government-led drive, supported by the World Health Organisation and Unicef, to vaccinate tens of millions of children at risk from polio in Pakistan. After a decades-long struggle by multilateral organisations, governments and NGOs worldwide, the disease is now endemic only in three countries: Pakistan, Afghanistan and Nigeria. On Tuesday,  a teenage volunteer was killed in Peshawar and four others were killed in the southern city of Karachi . It was not clear who was behind the shootings but  Taliban  insurgents have repeatedly denounced
Read more
More posts