Historic photos of Russia in 1917

By Dilip - Saturday, January 19, 2013
Hundreds of historic photographs documenting a young Yale graduate's travel to Russia during the start of the Russian Revolution have been discovered a near century later by his granddaughter after tucked away in his California home. Opening an old metal chest after her grandfather's passing, more than 500 hand-painted glass slides have been found capturing a remarkable 1917 excursion that put him face-to-face with heavy-coated soldiers, machine guns, bunkers and gas masks. Seen today fully restored after a near century of darkness, the slides were purchased in 2012 by Southern California camera and photo collector Anton Orlov after experiencing the extraordinary find first hand.

'...I was asked to come by a Northern California home to help translate and identify some mystery images,’ he writes on his photography blog of his first discovery of the photos in 2005.  ‘I love old photos, so I was eager to help. All I knew when I was on my way up there was that they were from Russia and really old,' he recalled. Opening up a number of wooden storage boxes presented before him, he was amazed by the hundreds of delicate glass slides, each containing tiny people, homes, villages and obvious signs of war. 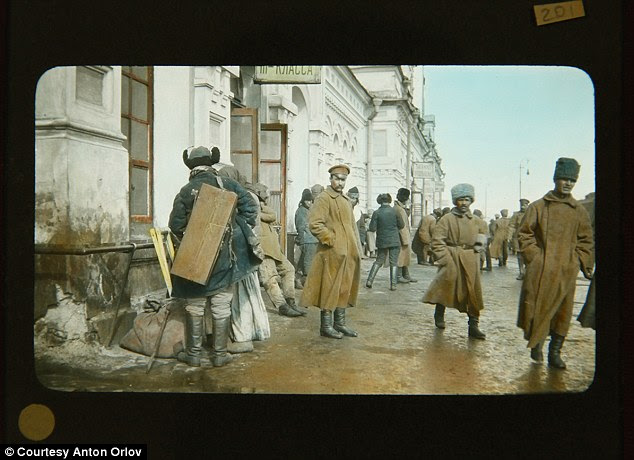 He purchased them all several years later, setting out to fully restore all that he could.
Inquiring of the photographer to the granddaughter, Mr Orlov was taken back in time to the fall of 1917 when John Wells Rahill, a recent Yale graduate and pastor, set out from the U.S. for Russia. Inspired by news of the first Russian revolution, a historic monument he wanted to experience and capture for himself, he grabbed his Kodak camera and joined the YMCA’s War Works Division, helping armies on both sides where he could. In the process he captured the people's everyday life, from the market place, to the bustling streets, to his own people working alongside him at the YMCA.

He even found time to travel to China and Japan after purchasing a number of photographs of the area taken before he viewed them himself - vowing to similarly capture them on his camera. After his return to the U.S. in the spring of 1918, he converted many of his best pictures to Magic Lantern Slides as a means to share his experience with others. He gave lectures on his experience with the YMCA while also working as a pastor, but by the 1920s, those who had worked in Russia during the First World War found themselves harmfully labelled as 'socialist sympathizers' in the U.S.

It’s believed result led to his pictures placed in his home's storage, locked away until his granddaughter's startling discovery. 'Those photos also have been unseen by the world because in mid 1920s they were put into a basement for storage and were only discovered 85 years later,’ Mr Orlov, who’s originally from Russia himself said. After a gruelling and expensive process of preserving all 500-plus photos, Mr Orlov is now hoping to recreate Mr Rahill’s journey himself come 2017.

As an avid collector, photographer and developer who has transformed an old school bus into a traveling photo studio and darkroom, Mr Orlov’s so-called Photo Palace Bus - aiming ‘propagation of knowledge related to historic photographic techniques through cross-country art exhibits, lectures and demonstrations’ - is helping to showcase the hundreds of images.

The Russian Empire in full colour (1910)

Popular posts from this blog

By Dilip - Friday, September 06, 2013
Pakistan and National Unity is an important position paper of the Communist Party of India, and a far-reaching text in the history of the Indian communist movement. The resolution dated September 19, 1942 contains an outline of the CPI's support for what it called the 'just essence of the Pakistan demand'; and the Report by Gangadhar Adhikari is a detailed explanation of the resolution. The resolution was confirmed by the First Congress of the CPI in May 1943.  Its arguments may be contrasted with the pamphlet titled Who Rules Pakistan? published in Bombay in August 1948, as a 'Communist Party publication' - and is one of the earliest position documents of the Communist Party of Pakistan.  The document is titled File CPI-31/1942 ; and forms part of the P.C. Joshi Archives at Jawaharlal Nehru University, New Delhi. The text of the resolution and report is also available in the book entitled Remembering Dr  Gangadhar Adhikari: Selections from Writings, Part 2 ; e
Read more

'Do you know', Napoleon once said to Fontanes, 'what astounds me most about the world?  The impotence of force to establish anything.  There are only two powers in the world: the sword and the mind.  In the end, the sword is always conquered by the mind' Conquerors, you see, are sometimes melancholy.  They have to pay some price for so much vainglory. But what a hundred years ago was true of the sword is no longer true today of the tank. Conquerors have made progress, and the dismal silence of places without intelligence has been established for years at a time in a lacerated Europe. At the time of the hideous wars of Flanders, Dutch painters could still perhaps paint the cockerels in their farmyards. The Hundred Years War has likewise been forgotten, and yet the prayers of Silesian mystics still linger in some hearts. But today, things have changed; the painter and the monk have been drafted - we are one with the world.  The mind has lost that regal certainty which a c
Read more

By Dilip - Friday, March 13, 2020
NB : Mike Davis is the author of Late Victorian Holocausts , a detailed analysis of the 19th century drought and famine that took millions of lives of the poor in India and China DS The current pandemic expands the argument: capitalist globalization now appears to be biologically unsustainable in the absence of a truly international public health infra-structure. But such an infrastructure will never exist until peoples’ movements break the power of Big Pharma and for-profit healthcare. The original H1N1 found a favored niche in army camps and battlefield trenches where it scythed down young soldiers down by the tens of thousands. The collapse of the great German spring offensive of 1918 has been attributed to the fact that the Allies, in contrast to their enemy, could replenish their sick armies with newly arrived American troops.... It is rarely appreciated, however, that fully 60 per cent of global mortality occurred in western India where grain exports to Britain and bru
Read more

By Dilip - Friday, March 30, 2012
There are still people who admire Godse for shooting a defenceless, unarmed old man at point blank range in a prayer meeting.. After all, modern society is awash with extremist beliefs, including support for suicide bombers and vigilante violence. E xtremism has taken centre-stage i n the guise of communal ideology and prejudices. People in high of fice believe in collective guilt (denouncing entire communities for the sins of a few), controlled mobs, revenge killing and vigilantism.   Click the title for Parts 1 & 2 of the Report [of the 6 volume document] of the  Commission of Inquiry into the Conspiracy to Murder Mahatma Gandhi by Justice Jeevan Lal Kapur  [Supreme Court of India]. The commission was established in 1965 &  submitted i ts report on 30 Sept 1969 . A whiff of evil A message and an appeal    Peace as a punctuation mark in eternal war The Supreme Court,Gandhi and the RSS Apoorvanand:  गांधीजी का आखरी महीना  - Talk on Gandhiji's Last Month Pune, Oct
Read more

By Dilip - Wednesday, September 14, 2016
NB: This line of theoretical and sociological inquiry is crucial for an understanding of the contemporary world, and has been neglected (in the main) by political scientists and historians. Alexandre Koyre (1892-1964) was a Russian-born philosopher and historian of religion and science. His 1945 essay on The Political Function of the Lie  was used by Hannah Arendt as a source for insights into her study of the origins of totalitarianism . Some observations and extracts are supplied below, along with links to Koyre's original essay, as well as a 2010 lecture on lying in journalism. They are worth reading, as a reminder that the deceitful and intimidatory atmosphere of our times is rooted in political phenomena that were commented upon decades ago - DS A perceptive analyst and a close reader of Alexandre Koyré, Arendt described totalitarian regimes as being “ secret societies established in broad daylight .” (see Koyre, pp 296-7). By imitating the apparatus of secret societies  wit
Read more

By Dilip - Friday, May 15, 2020
NB: Today is my father's thirteenth death anniversary. A few of his students from the first few batches have circulated their personal recollections. It is mainly with them in mind that I post this essay which I wrote in 2008, for a Penguin collection. (And here is something I posted in 2018, on his birth centenary). I hope it triggers some golden memories!  Love to you all. Dilip Of Bagpipes, Horses and Golden Orioles Dilip Simeon from Recess: The Penguin Book of Schooldays Palash Mehrotra (ed); New Delhi, 2008 This is a very personal story about a public school. There will undoubtedly be names that I’ve left out, but I trust I’ll be pardoned my lapses. What I’m sure about is that all of us who joined it in its foundational years share a powerful affinity with a Haryana village named Kunjpura. (Dist., as they say, Karnal). Thinking about schooldays at a point in life when middle-age is edging towards elderly-ness, can be a strange encounter with oneself. I recall
Read more

Covid County Simulator (valid for the USA, but with lessons for the world at large)

By Dilip - Friday, July 17, 2020
Covid County Simulator Overview Select the state and county using the drop-down boxes at the top of the page and the page will update with: Daily active cases 3-week forecast of active cases 100-day projection of active cases and deaths Note that you have to look below the graph to see the total projected deaths. Check covidcountysim.org daily as the regression forecast and simulation may change when we upload data each day from Johns Hopkins' GitHub site. Mortality rate :  You can override the calculated rate by typing a new one into the field. The model will use the new rate to calculate the number of deaths at the end of the simulation until you refresh the page. Running a social distancing ‘intervention’ The intervention date is set to after the prediction period ends. Then use the slider to increase or decrease social distancing. You will notice that this changes the target Rt value, which is the value you are targeting based
Read more