Gandhi visits the poor people of England in 1931 - Gandhi Video

Even though India's British rulers considered him a dangerous anarchist and repeatedly put him in jail, Gandhi always proclaimed his friendship for the British people. (Click for video link >-- When he was in London for the Round Table Conference in 1931, he decided to visit the mill areas of Lancashire.  He was warned by the police not to go there, for he would be mobbed by thousands of angry workers who had lost jobs due to the swadeshi boycott of English cloth. But he insisted on going because he wanted to explain ’s case to them. The American journalist William Shirer reported the workers’ reactions to Gandhi’s arrival in the mill town of . They instinctively recognised in him “a man who had devoted his life to helping the poor. They gave him a tumultuous welcome.” Gandhi was mobbed, but by people filled with admiration, not anger (Shirer, Gandhi: a Memoir). An unknown person took a photograph showing a smiling Gandhi in his dhoti surrounded by joyous women workers whose faces shine with love.

Here is Mirabehn’s account of the incident that ended in the photo below:  'One of the most remarkable episodes was at a mill where Bapu was shown around by the manager, who, at the end of the inspection, asked Bapu if he might have the leave bell rung so that the mill-hands, mostly women, could come and meet Bapu. “Of course, by all means”, Bapu said, and the bell was rung.

Immediately the machinery stopped and the building was filled with the sound of running feet. Across the rooms, along the passages, down the stairs they went, patter patter patter, and by the time we ourselves got outside, there was a large crowd of workers waiting. Bapu said a few words, then two of the women workers suddenly hooked him by the arms, one on each side, and throwing up their un-engaged arms, shouted. 'Three cheers for Mr Gandeye, hip, hip..' Hurrah! shouted the crowd,  and then again and once more, for the third and loudest time.. ' (Mirabehn, The Spirits Pilgrimage)

Other photographs from this trip show similar images of the common people’s love for the man whom their government portrayed as the Empire’s chief trouble-maker. There are few, if any examples of the leader of an anti-colonial struggle whom the citizens of the colonial power held in such affection. 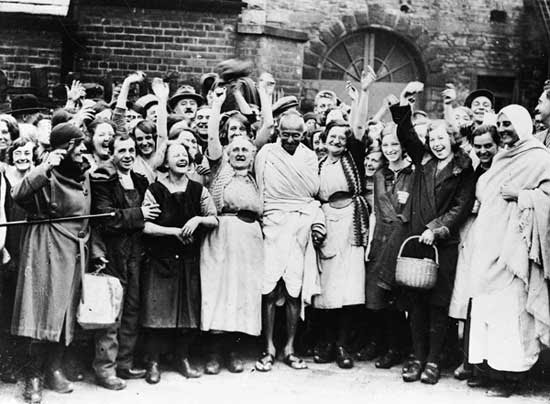 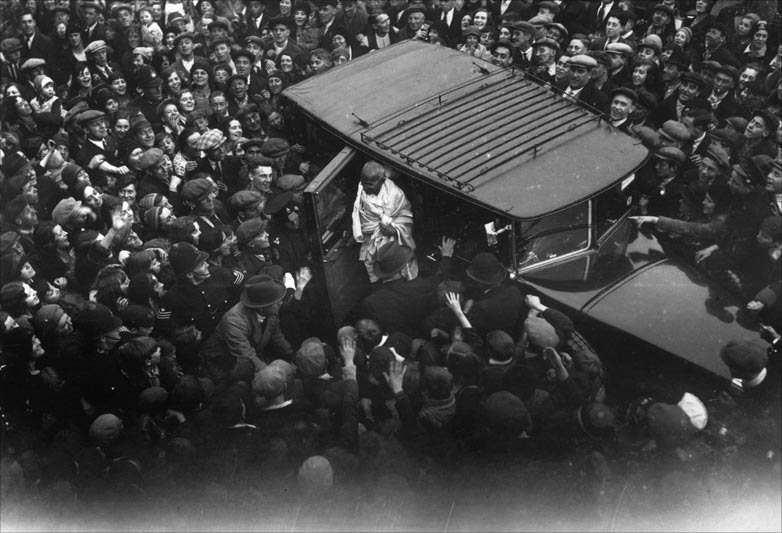 An East End crowd gathered to witness Gandhi's arrival in Canning Town, East London, as he calls upon Charlie Chaplin.

Gandhi did not build a systematic political ideology or ‘ism’. ‘Isms’ deserve to be destroyed, he said, they were useless things. He often made pragmatic adjustments to his political strategies and ideas, some of them in response to public criticism. It could be said that he was in a continuous debate, not only with his compatriots, but with friends and critics all over the world – his writings were not shastras, but a prolonged conversation. He declared that he since he was always growing intellectually, he was not concerned with consistency. At most, we could say that his attitude and approach were consistent. If his actions and ideas carry different meanings for people across space and time, this is not surprising. It explains the immense range and magnetism of his appeal. As the Norwegian philosopher Arne Naess reminds us: “There can be no rule-books of Gandhian policy. There are no easy Gandhian formulae. This, however, does not necessarily reduce the value of Gandhi’s teaching in the contemporary political situation. After all, the indication of direction that a compass-needle gives is of some value in itself, even if it takes no consideration of the terrain through which we must pass.” (Arne Naess, Gandhi and the Nuclear Age) December 1931, Mahatma Gandhi with George Lansbury (1859 - 1940)
and a group of children at Kingsley Hall in the East End of London.
(Photo by Hulton Archive/Getty Images)

Once, in the face of hostile sloganeering in in 1940, Gandhi remarked, “I love to hear the words ‘Down with Gandhism.’ An ‘ism’ deserves to be destroyed. It is a useless thing. the real thing is non-violence. It is immortal. It is enough for me if it remains alive. I am eager to see Gandhism wiped out at an earlier date. You should not give yourselves over to sectarianism. I do not belong to any sect. I have never dreamt of establishing any sect. If any sect is established in my name after my death my soul would cry out in anguish” (David Hardiman, Gandhi in his Time and Ours).  NB: The above paragraphs include extracts from my essay, The Legacy of Mahatma Gandhi:  Dilip

I attach another extract from the same essay (CWMG refers to Gandhi's online Collected Works): War and Nuclear Weapons: Gandhi first spoke about the atom bomb in February 1946. One historian has suggested that he delayed speaking out because he was concerned that ’s independence might be affected by an atomic threat from the (Rothermund 1991, 112). It should be remembered that wartime leader was the staunch colonialist Winston Churchill. Even after Gandhi’s fear of an atomic threat to ’s freedom receded, he warned of the dangers of colonialism. Britain was one of the Big Three powers of which one was armed with atomic weapons; and the atom bomb was “the last word in violence today” (CWMG 89:402). Thus, commenting on the communal killings in in November 1946, Gandhi said that they had set back the clock of independence. “Before long will pass under the yoke of the Big Three with one of them probably as the mandatory power” (CWMG 93:4). These statements remind us that Gandhi remained a steadfast opponent of imperialism till the end of his life. He reminded all “oppressed races of the earth” that “unless we can have a new way of fighting imperialism of all brands in the place of the outworn one of a violent uprising,” there would be no hope left for them (CWMG 89:103). In May, responding to people who believed that the bomb would put an end to war, he said, “The atom bomb has not stopped violence. People’s hearts are full of it and preparations for a third world war may even be said to be going on” (CWMG 90:374).


In July 1946, Gandhi answered some American friends who were arguing along similar lines. He insisted that the bomb had deadened the finest feelings of humanity. “There used to be so-called laws of war which made it tolerable. Now we know the naked truth. War knows no law except that of might. The atom bomb brought an empty victory to Allied arms but it resulted for the time being in destroying the soul of . What has happened to the soul of the destroying nation is yet too early to see” (CWMG 91:221). In September, he said, “I regard the employment of the atom bomb for the wholesale destruction of men, women and children as the most diabolical use of science.” When asked whether the bomb had made non-violence useless, he said, “No. It is the only thing the atom bomb cannot destroy. I did not move a muscle when I first heard that the atom bomb had wiped out . On the contrary, I said to myself, unless now the world adopts non-violence it will spell certain suicide for mankind” (CWMG 92:234). In June 1947, he commented on science, “There are two kinds of shastras in the world, one satvik and the other rajasik, one conforming to dharma and the other not conforming to dharma. The shastra of the atom bomb does not conform to dharma. It does not show faith in God. It usurps the place of God” (CWMG 95:221).

See also:
GANDHI MEMORIAL MUSEUM, Noakhali, Bangladesh
GandhiMedia - extensive collection of Gandhi photographs
Muriel Lester: The East End's peace messenger
Muriel Lester was a close friend of Gandhi, a published writer, an international peace campaigner and founded community centres in the deprived areas of Bow and Dagenham in East London. However, her story has been largely forgotten...Kingsley Hall was an institution founded by Muriel Lester, with her sister Doris, which has roots going back to 1912 when the sisters ran a nursery for local children.. Over the years the nursery would expand and become a 'People's House' where local residents could study, worship and enjoy social events. Muriel and Doris named Kingsley Hall, after their brother who had died young. It is still a working community centre that caters for local youth and women's groups and hosts activities such as dancing and tai-chi. "It's a building owned by, and for, the local community," says David. Today, Kingsley Hall is best known for Gandhi's three month residence in 1931 while he was attending a major London conference on the future of India. People still come from all over the world to visit Kingsley Hall because of this connection - most recently the son of Gandhi's secretary was shown around. However, few visitors will be aware that Gandhi's stay was only possible because of his close friendship with Muriel Lester. Even fewer will know anything about Muriel. 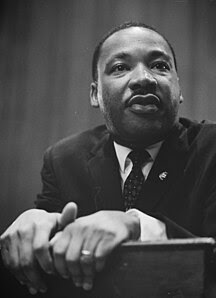 Martin Luther King: "Gandhi was probably the first person in history to lift the love ethic of Jesus above mere interaction between individuals to a powerful and effective social force on a large scale. Love for Gandhi was a potent instrument for social and collective transformation. It was in this Gandhian emphasis on love and nonviolence that I discovered the method for social reform that I had been seeking.  I do not want to give the impression that nonviolence will work miracles overnight. When the underprivileged demand freedom, the privileged first react with bitterness and resistance. Even when the demands are couched in nonviolent terms, the initial response is the same. So the nonviolent approach does not immediately change the heart of the oppressor. It first does something to the hearts and souls of those committed to it. It gives them new self-respect; it calls up resources of strength and courage that they did not know they had. Finally, it reaches the opponent and so stirs his conscience that reconciliation becomes a reality...If we assume that mankind has a right to survive then we must find an alternative to war and destruction. In a day when sputniks dash through outer space and guided ballistic missiles are carving highways of death through the stratosphere, nobody can win a war. The choice today is no longer between violence and nonviolence. It is either nonviolence or nonexistence.." Martin Luther King, full text here: My Pilgrimage to Non-violence, September 1958

See also:
Gandhi Heritage Portal
The Most Visible Indian in the World of Stamps
Another time, another mosque
Narayan Desai’s Gandhi Katha will end this January
In Pictures: Rare moments from Mahatma Gandhi's life
The music of humanity
The Abolition of truth (on the 'parivar's celebration of Gandhis murder)

सत्य की हत्या
Book review: In the name of the father
Amrith Lal on Narayan Desai - Recalling the political Gandhi
The music of humanity
Buddha, Jesus, Gandhi: Dissenters are always alone: Gopalkrishna Gandhi
The Assassination of Mahatma Gandhi: Inquiry Commission Report (1969)
Irfan Habib on Gandhi's Finest Hour (video)
The Broken Middle (on the 30th anniversary of 1984)
A matter of time - An essay on ideology and terror
The Philosophy of Number
हरिशंकर परसाई - महात्मा गाँधी को चिट्ठी पहुँचे
Inder Malhotra 'with Godse at the centre'
Modi wants them all: Godse and Gandhi together under BJP's 'big tent'
Gopalkrishna Gandhi: At point blank range - The killing of plural Hindustan
Apoorvanand: The retrial of Godse: Forgetting the facts
Haroon Khalid A Gandhi for Pakistan
THE DELHI DECLARATION OF JANUARY 18, 1948
Another time, another mosque: Gandhi’s Last Fast: January 13-18, 1948
Anil Nauriya - Gandhi on secular law and state
Book Review: Gandhi through a Marxian lens
A Hard Rain Falling
The Savarkarist syntax
The Futility of Common Sense: An Essay on Ahimsa
V.D. Savarkar and Gandhi’s murder